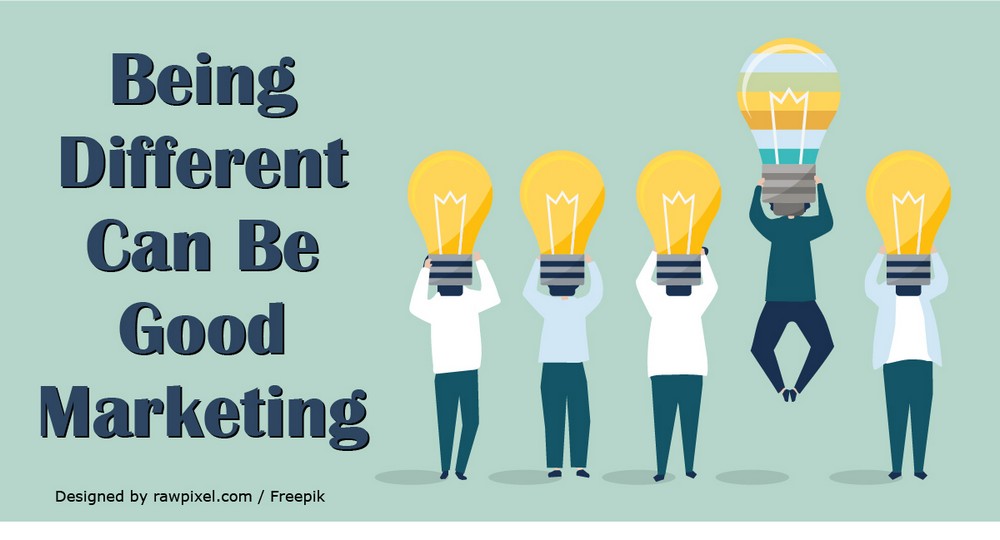 Being Different Can Be Good Marketing

I once had a lawn maintenance business owner come to me for door hangers. He wanted a list of services he provided — like mowing, edging, and trimming — printed on them. My response was to tell him that what he was saying was that he does the exact same thing that all his competitors do. He needed to be different in some way.

Why did American Motors, our once #4 auto manufacturer, go under? It might have been because they were selling cars that were similar to those offered by industry giants, General Motors, Ford, and Chrysler — the guys with deeper pockets, more dealerships, and better brand recognition.

At that time American Motors had the Jeep brand — something none of the others had. What would have happened if they had heavily promoted the one product that was "different" from what everyone else was selling?

Many businesses basically do what their competitors do. This is fine if you have a good market share. But if you are the little guy, it may be smart to be different.

Have a Different Product

One way to be different is to make your product different, like Volkswagen did. When American manufacturers were making big, slick cars with V-8 engines, VW was making an small, ugly car with a small four cylinder engine. They even advertised it as ugly. Your product can be bigger, smaller, shaped differently, or have extra features. It could have different packaging. Your service can be faster, different hours, better quality, more economical, or whatever. But different.

Making your product different may also make it more expensive. You may have created a new market position, or moved from a crowded one to one with little or no competition. Being different could mean you don't have to be the cheapest guy on the block. You might actually be able to make a good profit on something. If your different product sells for the same price as the "un-different" ones, your sales might increase. I was once trying to decide between several books on the same subject at a book store. I could not determine that any one was better than the others, so I bought the one with the prettiest cover.

The ideal way to be different is to have something your competitors cannot easily duplicate, like having a patent, or having special manufacturing equipment that they do not have and cannot easily acquire, or just do something they won't want to do. While McDonald's was frying hamburgers, Burger King advertised that theirs were grilled, not fried (perceived to be healthier). McDonald's could not change the way they cooked very easily. Don't think that your competitors will sit still if you start taking their customers. If you offer a coupon or discount, the others can do the same.  But don't do what Coca Cola did.

Probably the worst thing you can do, is to take a product that is different and make it like your competitor's. This is what Coca Cola did when they came out with New Coke. They took their extraordinarily popular product and made it taste more like Pepsi, because they were losing market share to Pepsi. Doing so gave their loyal customers, who liked Coke more than Pepsi, the choice of either drinking Pepsi, or drinking Coke, which tasted like Pepsi. New Coke backfired and Coca Cola had to put the original Coke back on the market (now called "Classic").

If you make changes in your products or service, you may lose some customers, but you potentially can gain many new ones, and loyal one. Do things that will differentiate you product or service from the others, and appeal the those who like what you promote.